A Piece of Tom!

We all do it! Even those of us who pretend we don’t. So why are we still hung up about it! “I predict a riot!” he says, one inspiring artist and his big ball of marinated politics! Cucumbers are once again influencing a generation… My.Kali.mag looks at Tom Bogaert.

Well, thank God for Tom Bogaert!  He grows the most controversial cucumbers! And we thought a political salad won’t be as interesting! Sarcasm doesn’t really cut it! The Hulk’s member! Shrek’s penis, Mrs. Dickleaf… we’ve heard it all and whatever that means, he sure has the explanation…The days of bulletproof suits are over, but it seems like artists these days, which also are individual power mediums, are risking showing something different! Something political, something controversial and worth being controversial for. Madonna’s cone bras days are over, but Tom’s “Jordanian cucumbers” are what’s happening now!

But Tom is on a roll here! Jo magazine referred to his work as “Humorous and wry exhibition”, and “The dancer on the rope of words” as Lebanese paper Al Akhbar noted. “I’m a political artist and I often deal with difficult themes and subjects," he says "but I always try to maintain a degree of lightness and humor in my work.That’s why - from the outset - I wanted to avoid the typical ‘dead serious Israel bashing art trap’ while working here in the region”.

With the possible exception on his art, the guy has a vision. He knows the type of art he likes to peruse, testing the market and all… he’s been tip toeing around. “I totally enjoy visiting other artist’s studios and shows, exchanging ideas and testing new projects.For any artist that’s crucial I think.” He shares.

The cucumber wordplay was the starting point of Tom’s ‘Jordan cucumber’ project. Coming to the region, this big boy had a lot of reading to do, coming across this “frantic book” as he called it, Tom’s “what is a cucumber” project was inspired by one book ‘Kill Khalid’ by Paul McGeough, which discusses the unsuccessful assassination of Khalid Mishal. “It is in this book that I first found the wordplay Jordan Option / Jordan Cucumber.  Apparently it is often used by Khalid Mishal, the leader of Hamas. In discussing the so-called Jordan Option, by which Palestinians might be driven from the West Bank to live among their eastern neighbors, he jokingly calls it the ‘Jordan cucumber’ because the Arabic word ‘khiyar’ translates as both ‘option’ and ‘cucumber.’ ” He says.

And the best part of this project? “This is called the ‘Jordan option’: the Israeli proposal by which West Bank Palestinians simply have to come to Jordan for all their problems to be solved.” he replies. “Conventional wisdom in Israel dictates that there is no need to evacuate the West Bank settlements and indeed no need to create a state for the Palestinians in the West Bank and Gaza because a Palestinian state already exists in Jordan” So he read a political book, join up summer’s take on urban camouflages! What about a boot camp?

Hassle-free, hands-free, Tom has certainly outperforms his own predecessor! “Given my background and history, an autobiographical reading is unavoidable.I need to make art with layers, in first instance it has to be visually interesting but there need to be more to it than just that.I love politics – I really do, and as mentioned before I see myself on the crossroads of visual art and journalism.” Yet, he doesn’t see his artwork as an extension of his previous human rights work.
Boot camp roots: Tom has documented genocide and human rights abuses in Africa and Asia for fourteen years as a lawyer for Amnesty International and the UN High Commissioner for Refugees. It was In 2004 when he called the quits and sorted for a change. “I was getting older (and maybe wiser…) I had always made art and decided to follow my dream: become a professional full time artist in NYC!  I left for New York in 2004 with one address in my pocket and worked my way in the mythical New York art world.” He says. 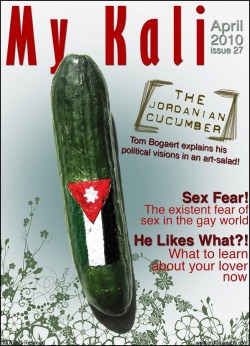 “After five intense New York years and following Maxim Gorky’s advice to leave the studio and go among the people, in 2009 I embarked on a two year Grand Tour of the Near East. I’m currently based in Jordan where I’m working on the first chapter of ‘Impression, proche orient’ (IPO) a project referencing issues relevant to contemporary Near East society including politics, artistic identity and cucumbers.”

The guy is deceptively relaxed. He has his mind set on a twist! Utility needn’t be all function, right? The art scene in Amman needs a good shake! Just enough to freak out the norm “I do think the art scene in Amman is totally connected to the contemporary art world as a whole. It is a cliché but I think it is true that the world is getting smaller (because of the internet, etc) and that helps a smaller scene such as Amman’s. On the other hand I think that the gallery scene in Amman could use some fresh freshness… I’m afraid I have seen too many ‘fine art decorative’ paintings in the galleries. Thousands of oil on canvas. Makan takes risks and that’s fundamental for a healthy art scene. Others are more careful. Maybe private gallery owners should take more risks. Maybe artists should take more risks. Maybe artists should open artists-run galleries… In conclusion: the art scene in Amman is small and great. But at the same time it desperately need of some kind of ‘My Kali’ injection. More risks, more fun – better art!”


Next step? “Syria and Palestine. This project is important to me in the sense that it forces me to return to the core of my artistic identity: a visual translator of geopolitical and social issues. The regional chapters of my Grand Tour could therefore be situated at the crossroads of visual art and journalistic reportages due in 2012.” Check up on Tom’s official site and keep updated on his work (here>)